This is another attempt to solidify my own thoughts through writing them down and hopefully write something succinct on a topic I think people might find interesting and useful.

Real Options (RO) is based on financial options theory used in financial markets, the basic tenant and the one thing to take away is that we need to postpone making a real commitment, one that is going to have a significant and irreversible consequences until we have enough information to make that decision.

Chris Matts and Olav Maassen who are the authors of real options, wanted to keep this as simple as possible so the came up with 3 sentences and 12 words to describe was RO is:

Value here is nuanced, given that we should base the work we do on a value proposition it makes sense that an option that we may wish to take, which could be the option to build out a feature or not,  must have some value, otherwise we wouldn’t be doing it would we?

However, the fact that you actually have the option to chose to do something, or not has value in its own right, so the option has value.

The value isn’t necessarily monetary based based it could be political, think of it this way, if I have £1m to spend on IT infrastructure then the value of that option is powerful, people will want me to spend the money with them, so the option itself has value.

At some point the option to do something, or not runs out, so you may have a feature that you have held back for certain market conditions to be true, if that doesn’t happen then the value is lost.

Never commit early unless you know why.

This fits nicely with Bohem’s cone of uncertainty, 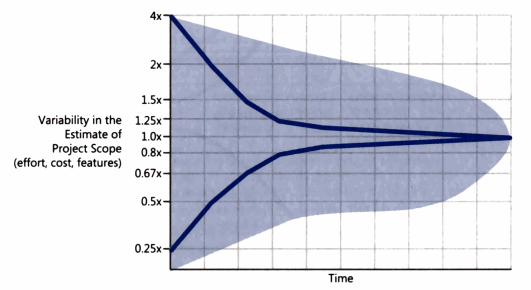 which helps us to explain why waterfall projects, where we make decisions about what to build based on estimates made at the point where we know least. early on in the project, are set up for failure.

As usual Cynefin has something to say on is too, see Liminal Cynefin, stepping over the threshold

Videos:
Risks and Decisions. The When and Not the How
Jürgen De Smet – Yves Hanoulle – Improve your decision making by using Real Option

One thought on “Real Options”