In a complex environment we should seek to change interactions not individuals, we should look to create a service based ecology and not simply look to reorganise or re-engineer as a first choice.

Reorganisation, restructures, re-engineering or whatever name you wish to use, threatens individual identities, their sense of who they are, their beliefs and their feeling of where they belong and fit into their world.

For me here the link is out to Daniel Kahneman and his System 1 thinking from thinking fast and slow  David Anderson brings this into his Kanban’s 3 agenda’s discussion when talking about sustainability, interestingly see this slide deck (slide 13 onwards) from a talk on the 3 Agenda’s that David gave in 2014.

Messing with a persons beliefs is not for the faint hearted and if we impose change through the use of positional power we simply end up with passive aggressive resistance. People go along with the change grudgingly, without passion, without drive or enthusiasm and as soon as the reorganisation is done, the previous “default” position will simply reassert itself quickly once the change agents have moved onto the next project,  think of a stretched rubber band snapping backing into position as soon as its let go.

This ultimately is the issue for many of the off the shelf Agile solutions or methodologies that seek to provide a single one-size-fits-all approach to change, they change people’s roles and titles and impose a process into a complex adaptive system that seeks to govern in an ordered way one that simply cannot work.

Firstly we need to start by mapping the here and now and not define some idealistic future, however we need to be aware of the following effects first.

The Hawthorne effect:  is a type of reactivity in which individuals modify or improve an aspect of their behavior in response to their awareness of being observed.

The cobra effect: occurs when an attempted solution to a problem actually makes the problem worst.

The butterfly effect: is the concept that small causes can have large effects

All of these effects challenge the idea that you can look at what went well and then work backwards to come up with a coherent plan that will work in the future.

A complex system has modulators not drivers5 , a driver assumes that you can predetermine the outcome and that there is a direct link between cause and effect, this is how systems thinking works.

Instead a complex system has dispositions and propensities, its is prone to or has a disposition to act in a certain way, its probabilistic not deterministic so you cannot say, except in hindsight that there is correlation or direct link between cause and effect.

Liz Keogh uses the Ludicorp example here, an on-line game that became flickr, Snowden refers to this process as exaptation, where something created for one purpose is used for a very different purpose. Exaptation leads to large leaps in evolution, for example Dinosaurs evolved feathers for warmth and they were exapted for flight.

In short you cannot replicate the “how” to do something from the “what” happened in a given context, it’s not possible.

David now introduced narrative and Sense Maker, this is better in his words, this blog post is roughly what was talked about.

The use of narrative capture allows us to take stock of a particular landscape and provides  a view of where we are now, so the current context.

This view comes in the form of a triad, again an example from cognitive edge, I think of this probably incorrect as a type o heat map.

The larger groupings show where we have “obvious” issues or opportunities.

The question for the below triad might have been

“Tell me a story about water supply in your village”.

The individuals would then place it on the triage based on its relevance to , taste, ease of water transportation or trust of water source. 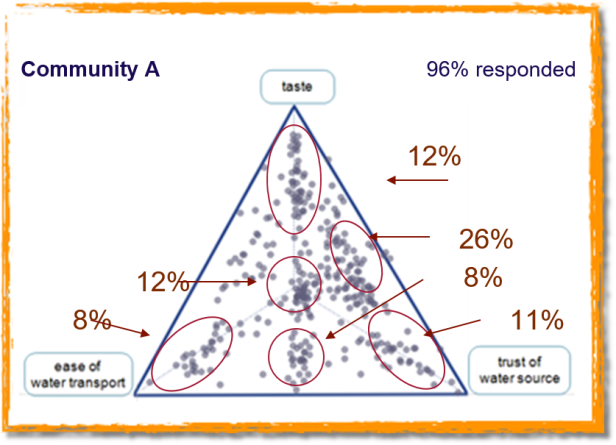 The larger groupings show us where the large opportunities or threats lie, but there are smaller groupings that Snowden  refers to as  adjacent possibles. We can move the context towards these by setting vector targets, this is where we set speed and direction and say we want to create more observation or stories like these .

How we move would  be the use of Safe to Fail Probes.

We look manage complexity not by analysing things to death and trying to map out our whole journey in advance, but by realising that you cannot do this and by having a sense of where we want to get to, a vision of what the future looks like and by taking small steps towards it.

One thought on “Cynefin #1 – Managing Change in a Complex Environment”